I was honoured and delighted to recive the invite to judge your club show Nov 2012!

The journey there was not the easyest, arriveing at Leeds airport with plently of time we boarded the plane only to be told our pilot was stuck in traffic on the M62 and he would be another 45 mins before we could take off. Haveing only 65 mins in Amsterdam if all went to plan to get my connection to Austria I asked the airhostess if I would make my connection she replied NO but they could get me to Austria Sat morning Panic set in! getting off the plane I ran like a 20 year old and just as I got on the plane they closed the doors so I was very lucky to actually make the show!
Thankfully I did and what a grand show it turned out to be. Everyone seemed very happy with the entry of 75 dogs over the three breeds and I dont think the venue could have coped with anymore and when the OES exibitors turned up with their tables ect the place was quite full. Entering the ring your eye was imediately drawen to the trophy table so many gifts and lovely rossettes for the lucky winners! I also had a first class ring steward and an interpritor who probably spoke better English than I did.
Starting with Border Collies like everywhere a mix bunch so many different types, for me movement is very important all three breeds are working dogs and should be capable of doing the job they were originally bred to do. Fit for function and absolute soundness is a must!
Next came the Beardies and what a pleasure to see so many good ones to say I was impressed is an understatement, several really did appeal and are capable of winning at the highest level anywhere all were presented to perfection and had that strenth behind on the move that is a must! My BOB in this breed a lovely veteran bitch absolutely at her very best and I wasnt at all surprized to be told later that she was a World winner (TWICE)! But others equally impressed when it came to BOB they had to give a little on maturity and overall finish, all good pastoral breeds look their very best at 7-8-9 plus years old.
I might add she pushed the Bobtail all the way for BIS could have gone either way and I wouldnt have been wrong. Then came the Bobtails a good show of 14 I am told usually there are 5-6 so  I was well pleased with the turnout. Just loved the dog I gave BIS his movement and strenth behind was always going to appeal to my eye ! one who would have little trouble taking his UK title, I also liked very much the intermedate male who turned out to be litter brother later litter! he also has a great future.
Looking back the show came up with some lovely dogs in all three breeds, THANKYOU for your entries and I hope everyone enjoyed their day as much as I did. I must also thank the club for the lovely judges gift and not forgetting a wonderful steward and interpritor! The weekend went so fast and the return journey also had its problems a late departure from Amsterdam and a three hour journey home from the airport to my home I finally reach home just before midnight, looking back would I do it again You Bet…. (even though I hate Traveling)…
My Best Wishes go to the Club and its hard working officals plus the membership for continued success and many more shows of this excellent standard.
BARRIE M CROFT   UK 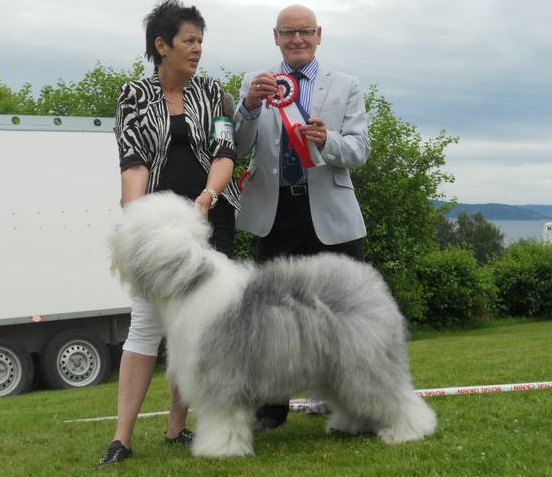